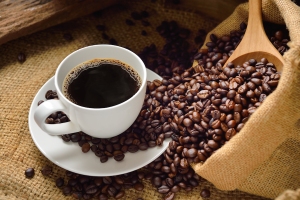 I also like to joke and say that I like my coffee like I like my women (here’s where my keen wit alters your expectation, and I proceed with my joke)…bitter. You can laugh. Most people just roll their eyes and give me a contemptuous chuckle. I’ll take what I can get.

I clearly remember the small handful of times a year I would be allowed my own cup of coffee as a young child. One of those times was every Christmas morning. My mother would get the pot of Folger’s going, and she would fix my dad and herself a cup of strong coffee. She would then make a cup for my brother and myself. Now, these concoctions were more milk and sugar than caffeine laced brew. Our cup of Christmas morning Joe gave us more of a sugar rush than anything else.

I do, however, remember looking into my father’s cup and realizing that the liquid in his cup was far different than my own tinted warm dairy mixture. It was that moment that I realized that a man, a true man (whatever that is) only drank his coffee without the good stuff in it. To be an adult, I leveled that all the sweet and all the cream had to be taken away. The things that were in place to soften the edges were things that hindered me from truly taking life by the gonads and making the world submit to my will. Keep in mind, this logic is from a 6-year-old (well, all but the gonads).

I keep thinking to myself, how much of what we are exposed to as children alters our expectations of being a “grown up”? I’m not talking about the obvious. I’m not saying that since Drew Brees brings his kids up around NFL football that they expect to be NFL players or that because Jay Z or Brad Paisley brings their kids up around recording studios that their kids will be recording artists. I’m talking more about the foundation of expectations. Six-year-old Robert had a foundation that daddies drink black coffee. But, good Lord, how long it took me to reach both platforms: black coffee, fatherhood. Both were (and are) acquired tastes.

THROUGH THE TRANSITIONS
I’ve been through the transitions, make no doubt. I’ve gone from drinking my milk in the morning that Mom made me drink to my French pressed coffee I  make myself. But the in between part is the interesting part. Maybe I’m still in the in between phase on to my next jumping off point.

I’ve tried the energy drinks. Even with those, I learned that I like Red Bull much better than Monster or Amp or whatever else they’ve invented. I don’t necessarily like Red Bull, but it’s the lesser of all the evils. I do not like the energy drop at the end of it’s effects. Nor do I like the fact that I have to mortgage my house to buy a can or two.
.

I’ve tried the “Cleansing” diet energy drinks that are supposed to help rid your body of toxins (or whatever it is the pseudoscientists talk to us about). They’re okay. They taste like made up fruit drinks, but they cost an arm and a leg for a month’s worth. I don’t mind paying for something that’s good for me, but I just can’t commit to an entire month of making sure I have a water bottle to mix in and making sure I remember to bring a little packet. And, come on, all the shaking! Maybe this reveals more about my self-perticulars than anything else (I should see someone about those).

COFFEE SNOB OR SELF CONFIDENCE?
I’ve gone through he various ways to get my morning cup. When I first started working out of college at The Clarion Ledger, there was a giant pot with a drip spout. You pulled the lever, coffee came out. But about five weeks into my tenure, they started saying that coffee was too expensive to just buy, and if we wanted it, we would have to pay to be part of the coffee club. Only Members of the Coffee Club could acquire said coffee (I call this the initial writing on the wall that publishing companies and newspapers were finally going belly up). So, I bought me a cheap coffee pot, kept it at my desk, and became my own man-boy. I do remember forgetting to turn it off and having that “Oh holy crap, I’m going to burn down the place” feeling at 1 in the morning and going to the newsroom just to turn it off. The building did not burn down.

When I started teaching, I started very near the bedrock, Jackson Public Schools. Not just JPS, but Wingfield High School. That place was a zoo, but it was a fun zoo. I made my own coffee there with the same cheap coffee pot, but that’s also when I started going through my, “There has to be an alternative to hot, black coffee” phase.

When I moved to Clinton Public Schools, I found a small handful of fellow coffee people. I also came to grips that I drink more coffee at work than I do at home. And since my wife doesn’t drink coffee, I should bring my nice coffee pot to the school. That lead to Keurigs and K-Cups and the what not.

We had a scare here at the high school a couple of weeks ago. The Keurig in the teacher’s work room went out for about two days. I thought about buying another one, but then I realized, no.
No, K-Cups are out the door. I need to dive deeper into myself, test the brown stained waters, and bring forth the glories of a French press. Call me a coffee snob if you want, but I like to think I’m self confident enough to pull it off. I’ll keep lying to myself if you promise not to point it out.

COFFEE IS LIFE: LESSONS I’VE LEARNED FROM THE STUFF
I’m not quite sure if the caffeine from coffee works on me anymore. I wonder if it’s the repetitive nature of a habit, an addiction, that does the trick. I’ve had coffee before bed and passed out. I’ve had no coffee in the morning and could not wake up. Maybe it’s mental. Maybe it’s science. Maybe it’s neither.

But I’ve discovered that coffee mirrors life. The grammar nerd in me is always enthralled with grammar-life parallels. So Coffee is life. They mirror. I’ve journeyed into loving my French press coffee. I’ve journeyed into realizing that you get what you pay for. I’ve reached the point in my life where I’ll pay a few dollars more for La Colombe Coffee or even attempt to discover the best way to brew cold coffee. But where I am in my coffee journey is impossible to reach if it weren’t for the mistakes that I’ve made or the experiments I’ve tried.

I know that leaving grounds in a pot for a long time is a bad idea. You need to clean the brewing device at least every other day. But if you don’t stay on top of it, you’ll have a mess on your hands that will affect the rest of your life.

I know what happens when you pour your coffee too early from a French press. It’s not ready. Be patient.

I’ve learned how to share my coffee. If you find something good, share. Chances are you’ll make a coffee convert and learn something your self. Plus, you’ll probably make a new friend or two.

Clearly, I’ve read too much into this. Or it’s time for another cup. Maybe both

So what does this have to do with life? I thought I had it all figured out at 18. And at 22. And 25. Lord, even 30. But what I’ve truly figured out is that each stage of life is like each stage of being a coffee enthusiast.

First, it’s just good. I like the sweet stuff. Let’s put all the sugar and dairy and fun in the cup as possible. But that leaves you fat and unhappy.

Second, I’ve learned that the more I pay attention to the type of coffee, the more my senses can actually pick up the tastes. The smokey flavors, the citruses coming through. What I like and what someone else likes may be different, but I know how to cater to both. I’m learning that in friendships and worklife as well.

Third, sometimes a simple cheap cup gets the job done. It’s nice to flash my flashy cup full of flashy coffee from that flashy place, but sometimes, a cornerstore is just what the doctor ordered.

Fourth, everyone is on their own level of their brew journey. Some don’t even like coffee. Some love it more than me. I’ve learned not to be the only one with all the answers but to be one voice and two ears.

The taste is acquired much in the same way a cup is brewed: Various ways over time. Ironic that this elixir that speeds us up makes us slow down before we get to it.

So, enjoy your cup, whatever that may be.

This site uses Akismet to reduce spam. Learn how your comment data is processed.